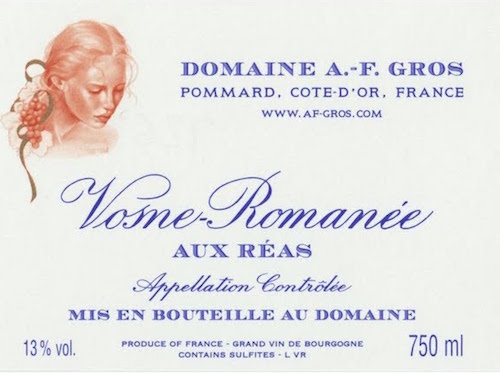 Anne-Francoise Gros, one of Jean Gros’ three children, has established a solid character and reputation in the wine world after taking over her father’s domaine in 1988.

At 25 years old, Anne-Francoise saw the family domaine grow from 3 to 6.5 ha with a new gravity-fed cellar in Beaune.

As a woman winegrower, Anne-Francoise knew how to prove herself and convince all who doubted her ability to manage a domaine.

She showed that she had not only the shoulders but the head to make her family heritage one of the greatest domaines of Burgundy.

Her passion for vine and wine as well as her talent, sensitivity and professionalism mean she is grower wine-lovers can count on, no matter the vintage.

Anne-Francoise has three children and has handed the reins of the estate to two of them, Caroline and Matthias.

Bourgogne Pinot Noir, A soft, superb blend of three small plots, two in Pommard and one in Volnay.

Bourgogne Hautes-Côtes de Nuits,  A gorgeous fine wine from a vineyard above Vosne planted in 1988 from cuttings in their old vine Richebourg.

Beaune 1er Cru Les Boucherottes, Basically an extension Clos des Mouches on the border with Pommard, here is the epitome of Burgundy, bright and beautiful.

Vosne Romanée Les Chalandins,The smallest parcel in Vosne, just below Maizieres at the northern tip of the Village – pure filigree.

CHAMBOLLE MUSIGNY, An ethereal wine, and a hologram of its chalk-rich soil, this beauty is a blend of five parcels, two of which are 1er Crus.

POMMARD 1ER CRU LES ARVELETS, The most unusual plot of Pommard, from a south-facing parcel, overlooking a small valley, this jewel is ripe and ready.

POMMARD 1ER CRU LES PEZEROLLES, Seamless, supple, superb expression of Pommard with density yet a soft luscious finish that belies its position on the Beaune border.

POMMARD 1ER CRU LES CHANLINS, Iron-rich, southern tip of Pommard next to Volnay and similar in structure to its neighbor, les Rugiens, muscular and meaty.

*Quantities are extremely limited, please inquire with your sales representative*

GRAND CRU, From a century old parcel in the heart of this large Grand Cru – the sleeper of the portfolio.

RICHEBOURG GRAND CRU, A full hectare, and so one of the great and most famous parcels of this exulted 8h vineyard.

The Domaine A.F. Gros was created in 1988 when Jean and Jeanine Gros started to divide the family Domaine (first known as Domaine Gros-Renaudot and then as Domaine Louis Gros). In the late 90s A.F. Gros acquired Savigny-les-Beaune Clos des Guettes, a south-facing historic vineyard from century old massal-selected vines. The estate is 11h total of which 8h are in production; and it is now run by the second generation, with Caroline as GM and Matthias her brother as winegrower.

Today, like the three other Gros family estates, A.F. Gros has most of its vineyard holdings in Vosne-Romanee: two 90yr old parcels, one in Echezeaux, the other in Richebourg; the Monopole Clos de la Fontaine, and their largest vineyard (1.7h) in the Reas.